They build their own marionette puppets in their small studio workshop based in Italy.

The company has performed in festivals, theatres, schools, hospitals, prisons, retirement homes and events in more than 25 countries, and the show “Hanging by a Thread” (Appeso ad un Filo) has received awards in Germany, Italy, Russia and Portugal.

Their work is aimed at an audience of all ages:
“they enchant children and make adults dream”.

-Di Filippo Marionette-
“Time is life,
and life lives in the heart.”

He graduated in Theatre History from the University of Bologna ( dams ). He completed his training in recent years with studies in disciplines such as Commedia dell’arte, the neutral mask, the larval mask, magic, pantomime, voice and movement on stage.
He worked as an actor with several Italian companies in 2010 and then entered the world of puppetry with the discovery of a small and fascinating laboratory hidden in the center of Barcelona: “House Workshop Puppets of Pepe Otal”. In this theater-laboratory, he discovers the nobility of wood, and its infinite faces, and rediscovers the threads that bind him to his childhood. So with such an illusion Gino, his first puppets, is born. Since then the desire to build and investigate increases and inevitably even the puppets multiply.
In his training on the marionette he meets and studies with the Catalan marionettists Lope De Alberdi and Litus Cuc, and the English puppeteer Stephen Mottram. He collaborates for about 3 years with the company “Zero En Conducta”, in particular with the Valencian artist Jose Antonio Putxades (Putxa) deepening the language of movement and the direct manipulation of puppets and scenic objects.
Many people help him in the company with their work and their friendship, forming a great family together.
For this reason the company is called “Di Filippo Marionette”. 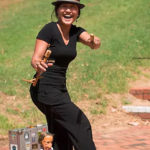 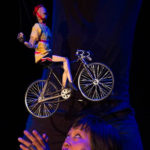 Born in the Philippines, childhood in Zambia, lived in Perth Western Australia and one year in Belgium on Rotary Exchange, Rhoda’s love of the arts stems from her varied upbringing and an innate desire to entertain. She arrived in Italy thanks to and with the musical roving trio The Sirens (www.redtopcreations.com). A graduate with a Bachelor of Arts in Music Theatre, she has worked on many stage productions as an actress, singer, dancer and emcee. She has been awarded Best Actress for her work in “Lorelei”, an original musical, and has also worked on screen including a TV film “The Great Mint Swindle” and various TV series including “StreetSmartz” and “Marx and Venus”. Rhoda has worked with puppetry in various forms and on different shows including “The African Magician” with Barking Gecko Theatre Company and in the New York Fringe Festival 2014 in “The Warrior and The Princess” with Blue Moose Productions.
Rhoda is living her dreams with Di Filippo Marionette!